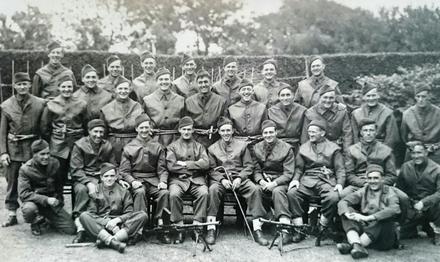 On 16 March 1947 the then 44 Commando of 3 Commando Brigade RM was redesignated as 40 Commando, Royal Marines.  The intention being to perpetuate a Commando representative of the Dieppe raid and the Italian theatre of war, and to recognise their contribution to the Allied victory in Europe as with that of 45 Commando, combined with 42 Commando's contribution to Allied victory in the Far East.
Since then 40 Commando have served with distinction in many places including Palestine, Malaya, Cyprus, Suez, Brunei and Borneo and Ireland, the Falklands, and more recently Iraq and Afghanistan [more......].
Primary sources
40RM Commando War Diary.
The Light Blue Lanyard , author Maj. J.C. Beadle MBE, MC, RM [more....]..