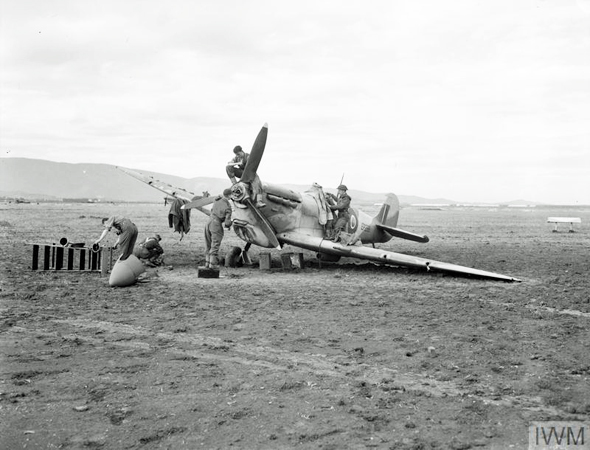 Image © IWM (CNA 3983) shows men of No. 3203 Servicing Commando at work on Supermarine Spitfire Mark VB, EP286, which suffered undercarriage failure on landing at Bone, Algeria, after a reinforcement ferry flight from Gibraltar. EP286 was repaired, and served in North Africa and Italy with No. 1435 Flight and No.208 Squadron RAF.

Servicing Commando Units (SCU) were first formed on the 31st January 1942 to provide a means of early operation from forward, or captured enemy, airfields.
It was initially proposed that they be called RAF Commandos however Mountbatten, a strong supporter of the concept of such a force, decreed that they be called Servicing Commandos. Their role would be to support operations at such locations by aircraft servicing, rearming, refuelling, and if called upon to, by defending such forward operating airfields until full support from Army units was in place.
They were volunteers and all highly skilled technicians. Their training included physical training, vehicle driver and amphibious training, rearming and refuelling aircraft, weapons drill and use of revolvers, bren guns, tommy guns, grenades, anti tank rifles, live firing exercises at night, etc. They wore army style khaki uniform instead of their RAF blues.

Twelve units were formed in the UK, and three in the Middle East, comprising some 2,400 all ranks. Their area of operations also included North Africa, Italy, France, and the Far East. Servicing Commando Units were disbanded in 1946.

Read more about the Servicing Commandos in these two excellent articles written by Wing Commander S.D. Ellard and Wing Commander Tim Newstead.
They were publisheded in Journals 39 and 51 of the RAF Historical Society, and are available with other articles on the RAF Museum website.

The SCU Training Course dates at CTC Inverary can be found here [view].