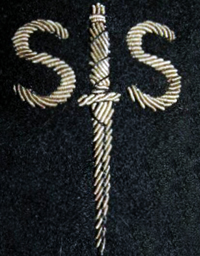 The first No.2 Commando was formed on the 22nd June 1940 for a parachuting role at Cambrai Barracks, Perham Down, near Tidworth, Hants. The Unit at the time consisted of four troops - 'A', 'B', 'C' and 'D'.  Eventually 11 troops were raised. A nominal roll of 'C' and 'D' troops can be found in our documents album within the No 2 Commando gallery.

In November 1940 the unit would be redesignated as 11 Special Air Service Battalion. They were the airborne part of the Commando "Special Service" units, and had no connection to the SAS later raised by David Stirling They would be renamed 1st Parachute Battalion in September 1941.

On the 26th February 1941 authority was granted to raise a new No. 2 Commando by the reorganisation of the 1st Special Service Battalion.  The new No 2 Commando under the command of Lt.Col. Augustus Charles Newman was now at Paignton, and consisted of men who had perviously served in some of the Independent Companies that formed the short lived 1st Special Service Battalion.

Many of the entries below commencing with the Commanders are from a narrative of No. 2 Commando history written by Bob Bishop and dedicated to John and Daisy Wright of Sutton Coldfield, Warwickshire in memory of their son, Pte. Dennis Wright, who at the age of 18 was the youngest member of No. 2 Commando to fall in battle, September 13th, 1943.  New content has been added over the years since.

View our Gallery images of No 2 Commando