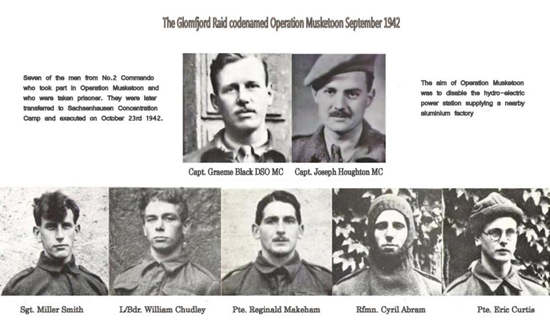 "It was on a day in late July, 1942 that the author noted the absence from the ranks of his troop of Capt. Graeme Black, Pte. Eric Curtis and Rfmn. Cyril Abram. At the same time, men of other troops recorded that Capt. Joe Houghton, Sgt. Richard O’Brien, L/Sgt. Bill Chudley, Pte. Reg Makeham, Cpl. John Fairclough, T.S.M. Miller Smith and Pte. Fred Trigg had also vanished. No member of No. 2 Commando had any inkling as to the significance of these disappearances, but as usual, no questions were asked.

The author and everyone else in No. 2 had no news of this operation, or the fate of the men who participated in it until long after No. 2 Commando had been disbanded. Indeed, it was not until the proceedings of the Nuremberg War Crimes Trials unfolded that they learned about the raid and the criminal imprisonment and execution of seven of our comrades in Sachsenhausen concentration camp. Only Pt. Fred Trigg, Sgt. Dick O’Brien and Cpl. Jack Fairclough had evaded capture by escaping to Sweden. These three men had later returned to service in No. 2 Commando and Pte. Fred Trigg was later killed in Italy in 1944.

A splendid, accurate account of this operation is contained in the pages of the book ‘Mustketoon’, written by Stephen Schofield, first published in 1962. This author commends this book to others, considering it to be, in his opinion, the best-recorded account of any Commando operation to have been published.

The leader of the Glomfjord raid, Capt. Graeme Black, was from Dresden, Ontario, Canada. He was the only Canadian to serve in No. 2 Commando. Capt. Black had been twice wounded at Vaagso and received the M.C. for his gallantry in the field. He became the leader of the 10-men group from No. 2 who landed from a submarine and made their way to their objective – the large hydro-electric power station at Glomfjord. The destruction they caused was hugely out-of-proportion to the small number of men involved in the operation. During the attempted escape, Capt. Black and six others were captured and later executed.

In 2004 my Canadian wife, Janet, and I communicated Capt. Black’s story to the Royal Canadian Legion Branch President at Dresden, Ontario, thinking that on the upcoming November 11th Remembrance Day they would make known Capt. Black’s heroic deeds in his home town. It is to my everlasting disappointment that the Legion decided not to mark his courageous passing. He has never been forgotten by this author who first served with him at the age of 18 and who has always been honoured to have known him."

Read more about the raid and the raiders here in our WW2 Commando Actions section.