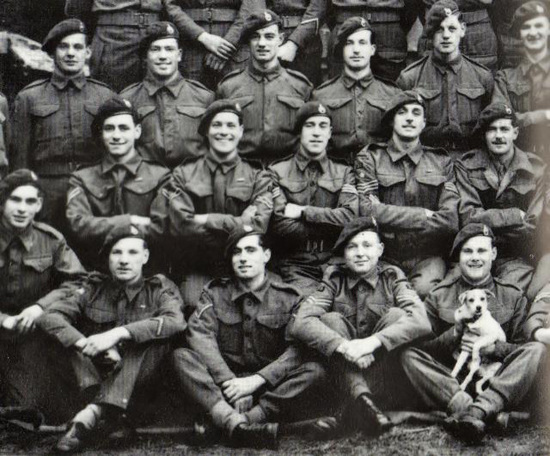 nb. The following history is from different named sources and should not be taken as the "Official" history.

The unit's operational role was to move ahead of advancing Allied forces, or to undertake covert infiltrations into enemy territory by land, sea or air, to capture much needed Intelligence, in the form of codes, documents, equipment or enemy personnel. The unit served in North Africa, the Greek Islands, Norway, Pantelleria, Sicily, Italy, and Corsica, 1942-1943.

In Nov 1943, 30 RN Commando returned to the UK to prepare for the Allied invasion of German occupied Europe. In Normandy, France, 30 Assault Unit (codenamed WOOLFORCE and PIKEFORCE) landed on JUNO and UTAH beaches, attempted to capture a German radar station at Douvres-la-Delivrande, and later fought their way into Cherbourg.

During July 1944 the Unit served in Rennes and Brest, and followed French forces into Paris, France, Aug 1944. In Sep 1944 30 Assault Unit began a series of operations in the Channel coast ports as they were captured by the Allies. By May 1945, Royal Marines from 30 Assault Unit had captured the German Naval Base at Bremen, Germany.

A 30 Assault Unit Royal Marines detachment was sent to the Far East in 1945, but the Japanese surrender precluded operations. Subsequent activities in Singapore, Indo-China and Hong Kong eventually provided much useful intelligence. 30 Assault Unit was finally disbanded in 1946.

Source
The Liddell Hart Centre for Military Archives from papers collected by Sqn Ldr David C Nutting and Lt Cdr Trevor James Glanville and presented to the Liddell Hart Centre by Sqn Ldr David C Nutting in 1997. View the scope of the collection [HERE....].
** When the unit was redesignated as 30 Assault Unit in Dec 43, the troop numbers were changed from 33, 34, and 36, to A, B, and X troops, with an additional HQ troop. They were then billeted at Littlehampton. Lt Col. Arthur Woolley was their CO at Littlehampton.
Footnote
In Nicholas Rankins book Ian Fleming's Commandos, and later in a programme titled Dieppe Uncovered screened on the 19th August 2012, documents would appear to reveal that in fact an Intelligence Assault Unit was formed for the Dieppe Raid (19th August 1942) by Commander Ian Fleming RN and operated covertly on the raid as a Platoon of 40RM Commando under Lt H.O Huntington-Whiteley (promoted Acting Captain on 15th Oct. 1942), their role to "pinch" signals intelligence documents, etc. from German Naval HQ at Dieppe.

One of the documents discovered is titled "History of SigInt (Signals Intelligence) operations undertaken by 30 Commando, 30 AU", and in para 4 of that document it states " the party at Dieppe did not achieve their objectives".