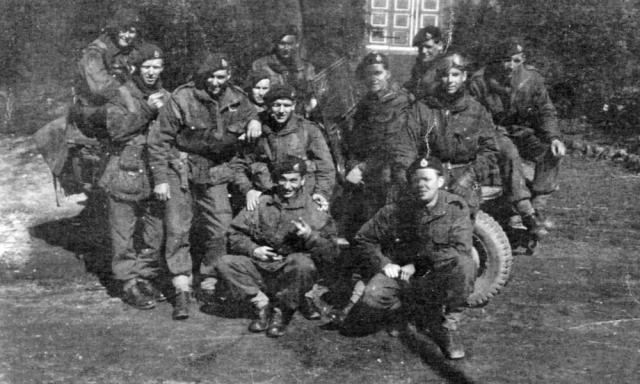 Formed at Burley in the first week of August 1943 as No. 45 Royal Marine Commando, Royal Marines, from the disbanded 5th RM Battalion.  Their first Commanding Officer was Lt. Col. N.C. Ries. There followed hard training with those unfit or unsuitable being removed to other duties. In September the Commando moved to billets at Ayr.

On formation there were five fighting Troops - 'A', 'B', 'C', 'D' and 'E' Troops.  'F' Troop was the Heavy Weapons Troop. 'H' Troop was the Headquarters troop which included Signals and Intelligence sections , Motor Transport and Administration.

From Achnacarry they returned for a brief period to Ayr for some leave. Then on the 19th January 1944 the Commando moved to the Combined Training Centre (CTC) at Dorling for additional advanced training. The Chief Instructor was Major W.N. Gray, RM [view], who was later to command the unit in France, Holland, and Germany.

During this time the Commando became part of No 1 Special Service Brigade under Brigadier Lord Lovat DSO, MC [view]. This Brigade consisted of No. 45RM Commando and three other Commando Units, all Army Commandos. No. 3 Commando, No. 4 Commando, and No. 6 Commando.

On the 26th May 1944 at 0400hrs the Commando left Eastbourne by train for a Staging Camp at Southampton. Then on the 5th June 45RM Commando moved by troop carrying vehicles to Warsash where it embarked in five Landing Craft Infantry (small). At 1700 hrs the same day their craft slipped anchor and formed up in the Solent taking their place in the vast armada of craft that was shortly to cross the English Channel for Normandy.

No. 45 RM Commando, Royal Marines, landed on the 6th June 1944 with the rest of the 1st Special Service Brigade on Sword Beach and were involved in the fighting in France until the 7th September when the Brigade was returned to England to refit. Disembarking on the 8th September at Southampton, the Commando moved to the Commando Group Reception Camp at Petworth, and later to Eastney Barracks at Southsea, and then Bexhill.

On the 14th January 1945 the Commando embarked at Tilbury Docks for Ostende, arriving the following day. From there the Commando moved forward and was involved in the  operations to capture Maasbracht and Brachterbeek. It was during the latter that Lance Corporal H.E. Harden, the RAMC medical orderly attached to 'A' troop of 45RM Commando, was awarded the Victoria Cross [read more].