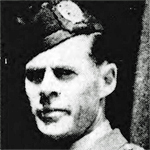 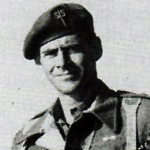 Lieutenant Colonel Francis West Fynn M.C. was appointed Commanding Officer of No 2 Commando from June 1944 after Lt Col Churchill was taken prisoner of war.
A former Lance Sergeant in the Royal Artillery T.A., he was appointed Second Lieutenant on the 23rd December 1939 [1].
11th July 1942 (Lieutenant) (Royal Artillery) posted to the Gordon Highlanders [2].
1943 (Major) (No.12 Commando) awarded the Military Cross. [3].
Recommendation
"Operation Cartoon
Major F.W. Fynn was in command of a Force of 5 Officers and 43 Other Ranks of the Special Service Brigade which landed at Sagvaag, Norway, on the night of the 23rd/24th January 1943.
Due to the speed and drive with which the operation was carried out, the main machinery of the Pyrite Mine at Lillebo and the silo installations at Sagvaag quay were destroyed. In addition casualties were inflicted on the enemy, three prisoners were taken, 4 enemy guns destroyed, and valuable intelligence material brought back. The great success of this operation was largely due to the careful planning of Major Fynn, and high qualities of leadership and courage displayed by him during the operation itself" [3a].
Lieutenant Colonel (Temporary) Fynn M.C., (No.2 Commando) received a Mention in Despatches in recognition of gallant and distinguished service in Italy [4].
He was awarded the Bronze Star, conferred by the President of the United States of America, in recognition of distinguished services in the cause of the Allies [5].
Bronze Star Citation
"Francis W. Fynn M.C., 109827, Lieutenant Colonel London Scottish Infantry, 2 Commando, British Army, for heroic achievement in connection with military operations in Italy on 1 April 1945.
By superb leadership and complete devotion to duty in face of every possible difficulty attached to a water borne-operation, Lieutenant Colonel Fynn led the 2nd Commando in an attack, with only one third of his force, against well-entrenched enemy positions near Lake Comacchio, Italy.
His inspiring influence materially affected the outcome of a hazardous and daring operation behind the enemy lines, as did his encouraging of his weary troops in successive assaults on a vital bridge and an enemy force of almost 1000 men were eventually captured.
Entered service from Lewes, Sussex, England." [5a].
6 November 1945 relinquished his commission on appointment to Southern Rhodesia Forces [6].
Sources
[1] London Gazette 34758, page 8535.
[2] London Gazette 35627, page 3035.
[3] London Gazette 35952, page 1405.
[3a] National Archives file WO373/93/81.
[4] London Gazette 37368, page 5816.
[5] London Gazette 38288, page 2917.
[5a] National Archives file WO373/148/598.
[6] London Gazette 38184, page 581.
Below is an account by Bob Bishop No 2 Commando from his history of No 2:
"Colonel Fynn was known to all as ‘Ted’, why it is not known, he arrived with that designation and everyone used that name thereafter. He was the third Commanding Officer to be at the helm of No. 2 Commando, inheriting the job right after we had lost ‘Mad Jack’ on June 6th, 1944.

A difficult man to describe - perhaps he was not as fatherly as Lt Col Newman, more like an uncle I suppose, and not as autocratic as Jack Churchill. His style was more ‘laid back’ and easier in the manner of many South Africans, but when you looked at Ted you knew that he had ‘seen’ life. Although this author is second-to-none in his admiration of ‘Mad Jack’ and considered him to be the ‘bravest of the brave’, after two and a half years of serving under his command Ted was regarded with an expression of some relief. This quiet man who had taken over, we all knew, was going to be o.k. It was as though someone had said “It’s time to lighten-up a little, boys!”.

In October, 1942, at Lerwick in the Shetlands, Ted became the titular head of ‘Fynn Force’, a group of Commandos formed with the purpose of making life uncomfortable for the Germans in Norway. Ted led attacks on objectives in Southern Norway. The first assault was on Stord Island where Ted blew up a pyrites mine at Lillebo. A highly successful raid, Ted managed to get this job done with the loss of only one Commando K.I.A. Other operations followed. Ted said nothing of this background when he joined No. 2 and went on to lead the Commando in action at Himare, Albania July ’44 and Sarande, Albania October ’44. Shortly after these operations, the author was seconded to S.O.E. and that was the last he saw of Ted.

The author would like to relate an episode from Ted’s tenure with No. 2. Ted had gotten himself married in Bari, Italy, with a good attendance at the ceremony by officers and others. The morning after the wedding night he was asked by someone, “How did the night go?”  Ted then said, “Well, do you remember what Charlie Newman said when he was awarded the Victoria Cross?” The enquirer replied, “What did Charlie say?” Ted then smiled and uttered the historic words:

"I GOT IT FOR THE WHOLE COMMANDO."

Photo of Commando in Gallery:
Yes
Archive pages :
No 12 Commando
No 2 Commando
‹ Obituary for Colonel Churchill DSO MC by Henry Brown OBE up 2 Commando, Some of the Men ›