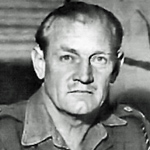 After a brief spell as 2i/c No 5 Commando, the then Major John Malcolm Thorpe Fleming Churchill (later affectionately known by some as Mad Jack) moved to 2i/c No 3 Commando. Wounded during Operation Archery at Vaagso 27 December 1941.

An account by Bob Bishop No 2 Commando from his history of No 2:

"It has been over sixty-three years since this author served under the command of Jack, but to this day it is impossible to think of the man without prefacing my reverie with some kind of exclamation such as: Whew! or My God! and I have to stop thinking about this larger-than-life character or else I wouldn’t get anything done during the day or sometimes, night. Jack will always be with me because he will be part of my life; something that will last and never fade.

Unlike so many of the men he commanded, Jack came from a pretty well-heeled Oxfordshire family. Following his formal education at the Dragon School, Oxford and King William’s College, Isle of Man, then RMC Sandhurst, he obtained a regular army commission in the Manchester Regiment in 1926. His career in the peacetime army came to a screeching halt ten years later when Jack and his C.O. agreed to disagree and Jack resigned his commission.

Jack was recalled to the army at the outbreak of war, served with distinction at Dunkirk and got himself an M.C. After which, he was one of the very first volunteers for the newly-formed Commandos. Jack found himself assigned as Major, and second-in-command of No. 3 Commando. The author wonders about that time. The thought of having three diverse personalities and future Commando legends – John Durnford Slater, Peter Young and Jack Churchill – all under the same roof is frightening! However, it all worked out well – J.D.S. was kicked upstairs, promoted to Brigadier, Peter Young eventually got control of No. 3 Commando, and Jack Churchill was shifted over to No. 2 Commando replacing Lt. Col. Charlie Newman, who had been lost at St. Nazaire.

The ‘coming’ of Jack to No. 2 Commando in 1942 and his subsequent campaign exploits are related elsewhere. In this narrative, the author confines himself to relating his memories of Jack and endeavors to try to convey some truths that need to be recorded and questions that need to be asked now, or they will never see daylight.

This author finds himself somewhat dismayed by various reports that have surfaced from time-to-time which infer that Jack Churchill was a sort of ‘publicity seeker’. For those who have that opinion, I ask them to consider this:

Where is there a book written by Jack Churchill concerning No. 2 Commando depicting himself in a starring role?

Jack has never written anything about his life and times, or caused them to be recounted by some ghost-writer. Thankfully no officer who served in No. 2 Commando has ever caused publication of a book to join the many which were authorized by Jack’s brother-colonels in other Commando units and several accounts written by lieutenants on upwards. The author makes this point, not in criticism of these many published scribes, but to illustrate that Jack certainly had a personal story of unexcelled heroism to tell, but was too darn modest to cash in on it.

There is that matter of a decoration. At Salerno Jack and his runner had operated far out ahead of the Commando and entered the enemy-held village of Pigoletti, whereupon Jack descended on each German sentry post or weapons pit, made its occupants prisoner and delivered them group by group to be guarded by the waiting runner. When the count was made it amounted to 42 prisoners Jack had taken. He even made the German mortar crews carry out their own mortars. The prisoners with all their weapons were then handed over to the leading Commando troop when it finally caught up with Jack. For this audacious feat of arms Col. Jack was recommended for the Victoria Cross, which was in due course watered down to a D.S.O. WHY? The award of the V.C. had certainly been made as a result of actions concerning far-lesser valour.

The qualities of leadership displayed by Jack’s fellow Commando colonels, Lt. Cols. Durnford Slater, Peter Young, Derek Mills-Roberts, Lord Lovat and Ronnie Tod, were all recognized by their promotion to the rank of Brigadier. They were all grand leaders who deserved such recognition. BUT Jack was not promoted. In fact, we have to sadly note that in 1948 he had been demoted to the rank of major engaged in the thankless task of keeping Arabs and Jews from each others throats in the Palestine mandate. It is thought that Jack had fully deserved the promotion which was awarded to his peers, but somehow denied to him. WHY? again.

It is said by many fanciful writers that Jack went into action in No. 2 Commando ‘resplendent with bow and arrows’. Where? The author participated in everyone of the Colonel’s operations in No. 2 and only saw our Jack adorned with claymore, bagpipes, an American M-1 carbine, sometimes a 45 automatic, haversack, helmet with large S.S. badge, and map case. Wasn’t that enough?

Jack much admired the discipline and enthusiasm of the average German soldier. He once stated ‘that was what made them such wonderful soldiers’. He compared such qualities rather favourably with those who inhabited our ‘mass-produced army’. He always advocated more realistic training for the ordinary British soldier although he fully realized that it would be impossible to put the whole army through Achnacarry.

Jack, the man, was hard, if not impossible, to get to know. He lacked a certain rapport with his brother-officers and certainly never got close to the rank and file boys in the same way as Charlie Newman. But, then again, Charlie Newman’s fatherly attitude was a tough act to follow and Jack Churchill’s pale, steely-blue eyes were fixed on the prosecution of the war and nothing else.

Our ‘Mad Jack’ once gave himself to prose, writing that: