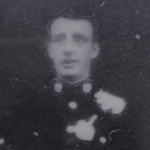 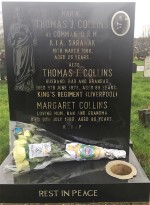 Marine Thomas Collins was shot on Indonesian territory on 16 March 1966, the same day as Lieutenant Ian Clark from L Coy 42 Cdo RM.,[see linked content] while taking part in a cross-border operation during “Confrontation”.
He was seen to fall but the circumstances of the operation made it impossible to recover his body at the time. Subsequent searches failed to produce any trace of his body or grave, or any indication that he had survived and might still be alive. A certificate of presumption of death was issued by the Registrar General in October 1966.
The fact that British forces were involved in operations inside Indonesian territory was considered highly sensitive. A press release of April 1967 stated:
“On the 18th March 1966, a patrol of 42 Commando Royal Marines was heavily engaged in the precipitous jungle of Sarawak, in the vicinity of the Indonesian border.
Marine Thomas Collins, the leading man of the patrol at the time it came under fire, was hit during this action and was subsequently found to be missing.
At the conclusion of the engagement a search was made for Marine Collins, but owing to the terrain and the proximity of the enemy it was not possible to carry out a further search for the body without unjustifiably hazarding the remainder of the patrol.
He was eventually posted as Missing Presumed Killed."
In 1992 the Defence Attaché Jakarta, assisted by the Indonesian authorities, led an exhaustive search for Collins’ remains and succeeded in locating his grave. His remains were repatriated and he was buried with full military honours next to his father.
Primary Source:
RM Corps Historian (Naval Historical Branch, HM Naval Base, Portsmouth).
Additional Sources:
RM Historical Society online.
Online Publication Soldier an' Sailor Too
Sir Peter Whitely Obituary  in the Independent 13 Feb 2016.
Notes
Primary Roll of Honour:
'Roll of Honour 1946 - 2020'
Linked content:
CLARK, Ian Campbell
Photo of Commando in Gallery:
Yes
Photo of grave in Gallery:
Yes
Archive pages :
RM Commando 1946 - present
42 Commando RM
Malaysia and Brunei