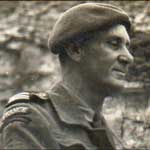 Captain (Commandant) Phillippe Kieffer, Officer Commanding the French Detachment, was awarded the Military Cross for gallant and distinguished service during operations in Normandy.
Recommendation
"Commandant Kieffer was responsible for the mopping up of the town of Ouistreham in conjunction with 4 Commando's assault on the battery. His unit suffered severely, 9 out of his 11 Officers becoming casualties, while Commandant Kieffer himself was wounded. The dash and resolute action of this Officer led to the final liquidation of a series of enemy strong points in the coastal built up area, and of an enemy company in the town itself."
Obituary in Commando Association newsletter 37.
"With a deep sense of pride we print a short appreciation of the late Commandant Philippe Keiffer, M.C. (O.C. French Troop - 4 Commando) whose passing was reported in the last newsletter.
Philippe Kieffer, who died in November, 1962, was one of the best known and best loved of French wartime heroes. Our members, to so many of whom he was a well-known figure, will appreciate the following written by one who served under him."
"If the name of the Ist B.F.M. Commando is today linked forever with the history of the Normandy Landings, to the Liberation of France, we owe it to him. It is very largely thanks to him that Frenchmen were among the first soldiers who set foot on French soil, at dawn, on the 6th june, 1944.
This cannot be forgotten, and his name will be forever linked in everyone's heart and memory with this extraordinary adventure, in which he led us in the course of four years training, and fighting, through night raids, on the French and the Dutch coasts, the Normandy landings, the battles of Benouville, Amfreville et Bavent, and the unforgetable entry into liberated Paris, where his son whom he would so much liked to have made a Commando Soldier had been killed by the Germans a few days earlier.
To his men Kieffer was known as 'The Pacha', always full of audacity, always young, and fit, always firm, yet indulgent towards the young because he understood them."
Sources
National Archives file WO373/155/36.
Commando Assoc. newsletter 37 issued Sept. 1963.
Photo of Commando in Gallery:
Yes
Archive pages :
No 4 Commando
No 10 Commando
French