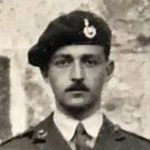 Lieutenant Patrick Ovens served  for a period at the CBTC and is shown in a photo entitled "Commando Basic Training Centre - Officers Mess - 1945."

He joined 46RM Commando shortly before it was disbanded.

Post war he served as a Captain with 41 Independent Commando RM in Korea being awarded the Military Cross in 1951 for " gallant and distinguished service".  [1]

In 1968 the then Lieutenant Colonel Ovens MC, Officer Commanding 41 Commando RM was appointed OBE.  This appointment was for his command of 41 Commando but especially for  the period that he and his Commando were engaged in the Torrey Canyon oil tanker spillage disaster off the coast of Cornwall. [2 + 5]

He was Chief of Staff to the Commandant General RM in the mid 70's before taking up his final role as Commandant of the Joint Warfare Establishment from 1976 to 1979. [5]