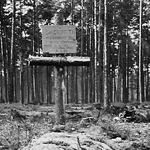 Kurt Joachim Glaser served in 3 troop, also known as  'X' troop, under the name of Keith James Griffith.  He was shot and killed by a sniper during operations with 1 Special Service Bde. to cross a railway bridge over the River Aller near the town of Essel.

There is a plaque at the entrance to the cemetery where he is buried which outlines the details of his death whilst advancing through the forest of Essel at the River Aller. That plaque can be viewed HERE. The image of his original grave depicted above is located within our gallery.

He had been attached to 1 Special Service Bde. certainly since January 1945 as it is recorded that he took part in recce patrols for 45RM Commando at Bell Isle. He is mentioned by name in the book A Plain Russett Coated Captain by Capt John Day of 45RM Cdo.

He was granted an Immediate Emergency Commission from the ranks (Lance Corporal), in the rank of 2/Lieut. on the 2nd June 1944*.  However in each of the above sources, and also written on his original cross at his grave, his rank is shown as Captain. The CWGC show his war substantive rank on their record which was Lieutenant, so his rank of Captain was a temporary one.