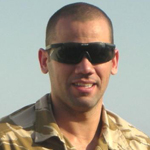 Corporal Benjamin Nowak was killed along with others in an attack on a Multi-National Forces boat patrol on the Shatt Al-Arab waterway.

All died as a result of injuries sustained following the detonation of an Improvised Explosive Device (IED) mounted on a bridge on the Shatt Al Arab River on the eastern edge of Basra City. The incident took place at approximately 1350 hrs local time. All were onboard a Rigid Raiding Craft (RRC) which was part of a routine boat patrol travelling north towards the Shatt Al Arab Hotel, a British Army base on the river. Three other UK service personnel sustained serious injuries in the attack.

He then served as a Section Second-in-Command at the Fleet Protection Group Royal Marines for two years. During this time he deployed to the Northern Arabian Gulf as part of the Fleet Standby Rifle Troop where he conducted boardings in support of anti-smuggling operations. In April 2003 he joined 40 Commando Royal Marines for a second time and it was during his time there that he attended and passed the aptitude tests to become a Physical Training Instructor.