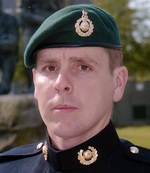 Marine Jason Hylton was attached to 539 Assault Squadron RM, and was killed along with others in an attack on a Multi-National Forces boat patrol on the Shatt Al-Arab waterway.

All died as a result of injuries sustained following the detonation of an Improvised Explosive Device (IED) mounted on a bridge on the Shatt Al Arab River on the eastern edge of Basra City. The incident took place at approximately 1350 hrs local time. All were onboard a Rigid Raiding Craft (RRC) which was part of a routine boat patrol travelling north towards the Shatt Al Arab Hotel, a British Army base on the river. Three other UK service personnel sustained serious injuries in the attack.

From there he joined 4 Assault Squadron Royal Marines embarked onboard HMS BULWARK where he served for 18 months, initially as a Landing Craft Utility Crewman and subsequently as a Landing Craft Vehicle and Personnel (LCVP) Crewman. He deployed with 4 Assault Squadron Royal Marines at the beginning of this year to the Middle East, which was his first operational deployment.