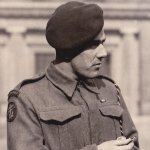 Private Frederick Trigg MM from Haywards Heath, Sussex, was killed in action in Italy.
He had been awarded the Military Medal whilst serving in No.2 Commando for gallant and distinguished service  in 1942 during Operation Musketoon in Norway and his subsequent evasion from capture. Seven of those on that raid were captured and executed.
Extract from the recommendation
Private Trigg was attached to No.2 Commando for Operation Musketoon. This highly successful operation resulted in the destruction of the important electric power plant at Glomfjord in Norway. Private Trigg throughout showed skill and resolution. He spent, in all, twelve days in enemy occupied country and eventually made his escape in spite of great exhaustion and hardship. [Recommended by Brigadier R.E. Laycock].
He rejoined No.2 Commando taking part in Operation Avalanche at Salerno, Italy, from 9 September 1943. It was reported in newspapers accounts of his death that he had been wounded during the Salerno operations and had subsequently rejoined his Regiment.
Sources
CWGC.
London Gazette 35853, page 210.
Recommendation for Awards / National Archives file WO373/93/75.
Casualty Lists / National Archives file WO417/72.
Report in the Mid Sussex Times newspaper 22 March 1944 [see linked content below].
[Image] Collection of Mrs Desiree Roderick MBE.
Primary Roll of Honour:
'2 Cdo. Roll of Honour'
Linked content:
TRIGG, Fred (2 Cdo) newspaper report
Photo of Commando in Gallery:
Yes
Archive pages :
No 2 Commando
Musketoon
‹ MAKEHAM, Reginald Henry up O'BRIEN, Richard ›