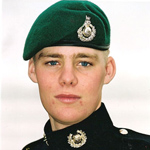 Victor Company was conducting a deliberate offensive patrol alongside the Afghan National Army to destroy a key Taliban command cell. This cell had been responsible for numerous attacks on both Coalition and Afghan National Security Forces in the Kajaki area.

Whilst establishing a vital fire-support location to protect his colleagues advancing on a Taliban defensive position, he was tragically killed by an enemy Improvised Explosive Device.

Within Victor Company, Marine Mackin was a member of the specialist team mentoring both the Afghan National Army and the Afghan National Police in Kajaki. This role found him on many patrols providing training and advice to the Afghan National Security Forces and acting as the vital conduit between them and the company. He was therefore often at the forefront of operations alongside his Afghan counterparts and was frequently required to guide and lead them into, and out of, hostile situations.