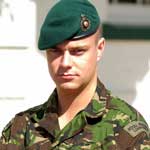 Marine Matthew Bispham was awarded the Military Cross in recognition of gallant and distinguished service in Afghanistan [1].
On 13 January 2007 Bispham’s company conducted a deliberate attack onto a hill and compounds. The enemy fired machine guns and rocket-propelled grenades from a group of compounds and all Troops were pinned down by the accuracy of the fire. Bispham’s group was tasked to assault.
He and another marine had over 50 metres of open ground to cover before reaching the first building to be cleared. Fearlessly and with absolute disregard for their own safety, they dashed forward. As they reached the building, an enemy emerged and shot his colleague, killing him instantly. Fighting almost hand to hand, Bispham engaged and killed a second enemy.
His company’s deliberate attack addressed this situation and regained the initiative from a bold and cunning enemy.
His fighting spirit, resolve and unflinching courage contributed directly to his company’s success [2].
Source
[1] London Gazette Supp. 58396, page 10411 published 19 July 2007.
[2] Globe and Laurel July/Aug. 2007 edition.
[Image] SFROH.
Archive pages :
RM Commando 1946 - present
42 Commando RM
Afghanistan