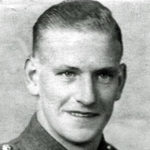 Lance Sergeant Arnold Howarth was one of the five Commandos who escaped after landing at St Nazaire on the raid.

He joined the Grenadier Guards in 1939 aged 18. His 5 brothers were also in the Armed Forces. He later volunteered for and was attached to No.2 Commando. On the 28th March 1942 he sailed with the Commandos to St Nazaire and took part in Operation Chariot. He was a member of Lt John Roderick's troop and was on board HMS Campbeltown. After landing and during the attack Arnie Howarth was wounded, and when ammunition was running low, he and several others took shelter in a cellar of a bombed out building. They decided to leave and split up and try and make it back to the UK. Howarth although wounded was befriended by a French family who gave him shelter and civilian clothes. He was treated by a local doctor for his wounds. He managed to get on a train and travelled to Bordeaux escaping to the unoccupied Vichy France.

After subsequent capture and imprisonment by Gendarmes he ended up in Fort La Revere, Nice, along with about 300 other British service personnel. In August 42 he wrote to the Grenadier Guards RHQ whilst a prisoner and describes the cut on his face but also the fact that about 20 -30 pieces of shrapnel in his back had to be left in place. In the Autumn of 1942 he and about 50 others managed to escape. Howarth was part of the organising committee. In October 1942 he managed to get back to the UK.

Being the type of man he was Arnie Howarth was desperate to rejoin 2 Commando and so he did. During Operation Avalanche, he was with 2 Commando when they attacked at Salerno. It was here that he was wounded again, injuries so severe that this time they resulted in his being sent home at the end of year and medically discharged.

Arnie is famous as being one of the five Commandos who had landed at St Nazaire that managed to get back. He was awarded the BEM for his part in the escape from Fort la Revere, and a Mention in Despatches for St Nazaire, and the French awarded him the Croix De Guerre.

At the end of October 1944, Arnie, who was residing in Rochdale, had been presented to the King and awarded his BEM whilst on his honeymoon in London. This was only 3 days after getting married to his sweetheart Irene. He had been suffering constant pain but was not one to complain. On the 8th November 1944, the pain became unbearable and he was rushed into hospital in Rochdale where sadly he died on the operating table.

An article in the Guards Newsletter of 1990 stated his shrapnel wounds were more serious than had been realised. I loooked up a handwritten nominal list of 2 Commando that I had been given and against his name was "Died of wounds sustained at Salerno". I have now traced a book, Emissaries, written by a Jewish American citizen who was resident in Europe at the time of the raid, and the same age as Arnie. They had met on the train in Vichy France and the American offered to help him in his escape. In this book the author describes speaking post war to Arnie's widow, Irene, who mentioned about the pain that he constantly suffered after his injuries and there is reference to shrapnel in his thigh and stomach after the Salerno raid. His death certificate shows cause of death as a perforated duodenal ulcer and as a result he is not currently shown on the CWGC roll nor on any War Memorial.

Although not a Commando, it should be noted that one of Arnie's brother also died in WW2: 4132720 Private Edwin Howarth, Cheshire Regiment 2nd Bn. , died on the 23rd June 1944 aged 36, Remembered with honour at Hottot-Les-Bagues War Cemetery. 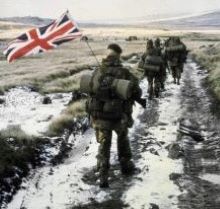