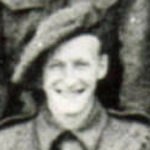 After being taken prisoner at St. Nazaire on 28th March 1942, Bradley, Brown and Searson were sent to Germany. On 17th August 1942, using a stolen file, Brown, Searson and another prisoner of war cut through the window bars and escaped from Stalag VII B. They had been at liberty for four days when they were caught as they slept in a wood.

Their second attempt was made at the beginning of October 1942; wearing overalls, old caps and rucksacks, they posed as civilian workmen, but their disguise was penetrated the next day. For punishment they were sent to stone quarries near Bunzlau, and when they refused to work, received instead nine days in the cells, prior to their return to the main camp. Although Brown succeeded in leaving Greiffenberg working camp in March 1943, he was arrested at Gorlitz because the dye from his overcoat stained his face and neck. He was sent back to Stalag VII B where he again met Searson who had in the meantime helped two other prisoners of war to leave a working camp at Sternberg, and had acquired money and clothing with a view to making another attempt.

This took place in July 1943, from a factory at Freiheit-Johannesberg. Accompanied by Bradley, he travelled by train to Engen, and the two men were nearing the Swiss frontier when they were caught and once more returned to Stalag VII B. Brown who had waited another month to acquire a civilian jacket, was detected as he was leaving the factory on 12th August 1943.

By October 1943 Brown, Bradley and Searson had completed their preparations for a combined effort. At this time they were employed at Wosswalda, and while the guards were having a meal the three men forced the door lock with a bent nail, walked to the station, and travelling on slow trains reached Tuttlingen unchallenged. Completing the remainder of the journey on foot, they crossed into Switzerland near Hofenacker on 25th October 1943.