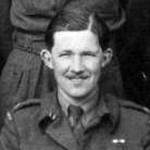 Peter Young was commissioned Second Lieutenant in 1939. He served in France with the British Expeditionary Force before being wounded and evacuated back to the UK at Dunkirk.  Joining No 3 Commando in the first selction of officers after its formation, the next few years would see Peter Young rise to the temporary rank of Lieut. Colonel and assume command of No 3 Commando in late 1943. He took part in the early raids on Lofoten and Vaagso, being awarded his first MC for his "gallant and distinguished services" during the latter.
After a brief interlude on the staff of Combined Operations HQ, he returned to No 3 Commando with the war substantive rank of Major and as second in command. During the Dieppe raid he was awarded the DSO for "gallant and distinguished services".
In 1943 he was awarded a bar to his MC for "gallant and distinguished services in Sicily" and then took command of No 3 Commando during the invasion of Italy after the promotion of their CO  Lt Col. John Durnford-Slater. Peter Young was later awarded a 2nd bar to his MC for "gallant and distinguished services in Sicily." In 1944 he led No 3 Commando on D Day and in the subsequent actions in Normandy until September 1944.
On the 2nd October 1944, after being ordered to take over as 2i/c of 3 Commando Brigade, he left to join them in the Far East. On arrival he discovered that Brig. Nonweiler RM had taken ill, and so Peter Young assumed temporary command of the Brigade. After returning to England at the end of the Arakan Campaign, he briefly assumed command of the 1st Commando Brigade until the surrender of Japan.
Post war Peter Young remained in the Army serving for 3 years in command of the 9th Infantry Regt. Arab Legion, finally retiring with the Honorary rank of Brigadier in 1959. He took up post as Reader in Military History at the Royal Military Academy, Sandhurst. He later founded a Civil War reenactment society called The Sealed Knot.
His death in 1988 was notified to members in Commando Association Newsletter 88 where the then President, Colonel Tony Lewis,  wrote this obituary:
"Brigadier Peter Young was a remarkable man with a natural talent for soldiering. Apart from Dunkirk, his wartime career was with the Commando Group and in particular, No. 3 Commando, with whom he served from Troop Leader to Commanding Officer. There cannot be many soldiers, who, starting with Dunkirk, followed up by fighting in all theatres of war, the Mediterranean, Burma, and Europe. What is more, this was clearly no rear rank stuff, as his D.S.O. and M.C. and two bars tell us.
He was a colourful character and had more than his fair share of the qualities of leaderhip. Probably the strongest of these was his unflapability. I have seen him receive bad news and there would be a short pause before the humorous side of the problem struck him which he would then illustrate with a sharp dart of his irrepressible wit. He had a good brain, which, after the war, he applied to Military History and the Civil War in particular, becoming the recognised authority on this war, about which he wrote many books. Not satisfied with this, he formed the Sealed Knot and re-enacted the battles with real people.
His Memorial Service was well-attended by his comrades of both wars, those of the Sealed Knot looking splendid in their red velvet ceremonial dress uniforms, raising our spirits on an otherwise gloomy occasion. He will be sadly missed at Commando Association events and especially by the members of his Commando, No. 3, who held him in high esteem. We will all feel the loss of one of our most colourful and successful leaders and our sympathy goes to Joan, his widow. Col. A. D. Lewis (President)."
Sources:
Storm from the Sea by Peter Young.
MC: LG Supplement 35510, Page 1506
DSO: LG Supplement 35729, Page 4328
Bar to MC: LG Supplement 36217, Page 4661
2nd Bar to MC: LG Supplement 36327, Page 255
Photo of Commando in Gallery:
Yes
Archive pages :
No 3 Commando
3 Special Service / Commando Brigade
‹ DURNFORD-SLATER, John Frederick up BARTHOLOMEW, Peter Ian ›