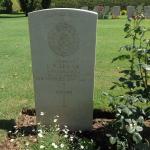 Lieutenant Charles Lea, G.M., died during operations at Salerno, Italy. He was the husband of Mrs Lea. of Sutton, near Hull, Yorks.
No.2 Commando War Diary extract
9th September 1943
"Nos. 1 and 5 troops operating against the Western exits of Salerno began to meet increasing opposition. The enemy was evidently trying to break out of the town Westwards towards Vietri, and about noon, a Tank (Mk.IV) made its appearance in front of the two troops of the Commando.
Some casualties were caused by the tank until it received two direct hits at 900x from one of the 6 pounder A/Tk guns of the 73 A/Tk Regt. which had been moved up on Lt. Col. J.M.T.F Churchill's orders. This may have jammed its turret. It retired into Salerno and did not reappear.
A second tank was hit twice by a Piat fired by Capt. Henderson. Lieut. P. Lea GM, RE, was killed by one of the tank shells, and was the first fatal casualty in No.2 Commando. The shell burst in the branches of a tree above him, and a fragment hit him on top of the head. He was not wearing his helmet. Four OR's were wounded at the same time, also some men in a patrol from No.2 troop immediately afterwards."
Citation for the George Medal awarded in 1941.
Gazettes : St. James's Palace, S.W.1.
30th September, 1941.
The KING has been, graciously pleased to approve the award of the George Medal, in recognition of conspicuous gallantry in carrying out hazardous work in a very brave manner.
"On the 9th November 1940, a German aeroplane, carrying a load of bombs crashed at Bromley demolishing two houses and trapping certain of the occupants in the debris. Capt. Lea gave immediate assistance regardless of the difficulty and danger involved.
Nearly 30 bombs required to be disposed of. Some of them were in the debris and others entangled in the wreckage of the aeroplane.
Capt. Lea took the matter in hand himself and in the course of the night and the following morning, by skilfull and courageous work, he completed the disposal of all the bombs, so making it possible for the rescue of the trapped persons to proceed in safety.
This case is typical of many others in which the gallantry of this Officer has been a safeguard in the whole neighbourhood.
On another occasion when a parachute mine fell at Loring Hall, Crayford, Capt. Lea, with the concurrence of the Superintending Naval Officer, approached the mine and placed under its nose a charge of six slabs of gun cotton and connected up the exploder.
The work was extremely dangerous as the bomb fuse mechanism had started to run on two previous occasions, and only a few secons were left before exploding. The mine was successfully detonated.
This Officer has carried out over 300 reconnaissances of unexploded bombs and has personally supervised the rendering safe of all the bombs in his area which have presented abnormal conditions of difficulty and danger."
Sources
CWGC
No.2 Commando War Diary.
London Gazette 35292, page 5654.
National Archives file WO373/66/1352.
Primary Roll of Honour:
2 Commando Roll of Honour
Photo of grave in Gallery:
Yes
Archive pages :
No 2 Commando