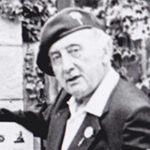 Albert William Kenneth Phillott, then a Private and known as Ken, was one of the early volunteers to join No 4 Commando in 1940 aged 20.  He was amongst a group of eight from the Glosters who served in 'G' (later 'B') troop of No 4. There is an image of this group in our gallery [view here].

In March 1941 he was part of the commando contingent from 'G' troop who took part in Operation Claymore,  the Lofoten Islands raid. We have an image in our gallery of the signatures for lifebelts of those from that troop who were on board the vessel Queen Emma [view here].

In 1944 Ken took part in Operation Overlord at Normandy.  He was attached to the HQ Intelligence section of the 1st Special Service Brigade and we have images of him in the gallery at Le Plein and Breville during this period, annotated with with his name and unit, and his rank shown as Lance Corporal.

Post war Ken took an active role in the Commando Association being vice chairman and then, in 1977, chairman of the London branch.  In a 1995 edition of the Commando Asssociation newsletter he is shown serving on the General Committee of the Association. An avid collector of cap badges, Ken amassed a unique collection of  badges of the 95 Regiments & Corps' parent' units of the men who volunteered for the Army Commandos of WW2 [view here].

Ken and his wife Mary moved  from their home in  London to Wickford Essex.  In 1983 Ken was Chairman of Wickford Horticultural Society *

His death was announced to members in Commando Assn. newsletter 111 of Sept 2000, his rank there being shown as Corporal.