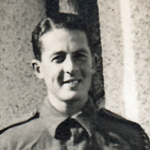 Troop Sergeant Major Kenneth McAllister spent several years of his childhood in America in the Southern states as his father worked in the Cotton trade. He was a fine amateur boxer. His occupation pre war was as a Cotton Clerk.
Service
23 March 1937 joined 10th Kings Liverpool Regiment TA. Then moved to the 1st Liverpool Scottish Btn. Queens Own Cameron Highlanders TA.
1 Sept 1939 mobilised from the TA.
April 1940 volunteered for Special Service, posted to No.4 Independent Company at Sizewell.
5 May 1940 proceeded overseas to Norway with Operation Scissorforce.
1 June 1940 returned back to Scotland.
November 1940 attached 1st Special Service Bn. at Paignton.
February 1941 attached to No.2 Commando 5 Troop.
1942 Ayr - Troop Sergeant Major of 5 Troop.
13 April 1943 proceeded for service overseas via Gibralter.
August 1943 to the invasion of Sicily.
September 1943 to the invasion of Italy (Salerno) and then engaged in operations in the Dalmatian Islands off the Yugoslav coast and the island of Vis, Albania, and back to Italy.
17 April 1945 wounded during operations at Lake Comacchio.
Post war served in Germany as a Company Sergeant Major (CSM).
Sources
Dennis Reeves, curator Liverpool Scottish Museum Trust.
Steve McAllister (son)
Casualty Lists 1939-45 / National Archives file WO417/91.
Notebook of LSgt Joe Rogers 5 Troop.
CVA Gallery images.
Linked content:
A letter about Joan Rogers, nee McAllister
Photo of Commando in Gallery:
Yes
Archive pages :
No 2 Commando
No 4 Independent Company