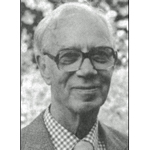 Captain John Dawson, M.B., R.A.M.C., Medical Officer attached to No.1 Commando, was awarded the M.C., [1] during operations in the Arakan, Burma.
Citation
On the 31st January 1945 at Hill 170, near Kangaw, Captain Dawson as medical officer carried out his duties with exemplary courage and coolness throughout. He tended to wounded men who were still under heavy fire in exposed places, and helped to carry them to a shallow slit trench where he gave them further attention before evacuation, though still exposed to fire himself. The whole day long he moved about among the wounded showing complete disregard for his personal safety, and altogether dressed and evacuated 90 casualties, most of whom he attended to under constant fire in the forward area [2].
In 1989 Dr. John Dawson, M.C., was appointed O.B.E., for medical and welfare services to the community in Cameroon [3].
Sources
[1] London Gazettes Supp. 37040, page 2079.
[2] National Archives file WO 373/36/29.
[3] London Gazettes Supp. 51981, page 16.
[4] Image credit - Obituary in the British Medical Journal, volume 307, page 56, 3rd July 1993.
Archive pages :
No 1 Commando