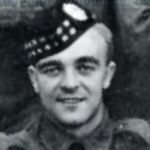 Private John Gwynne, 5 troop, died during Operation Chariot, the raid at St Nazaire [1]. He was one of the commando contingent on HMS Campbeltown and received a posthumous Mention in Despatches [2][3].
Recommendation
"Pte. Gwynne proved himself to be a courageous and determined soldier. His disregard for personal danger in the attack and his efforts to destroy enemy gun positions mounted in the roof of the Pumping station were outstanding.
Later in the street fighting, although wounded, he continued showing a fine example until, when ammunition was exhausted and very weak through loss of blood, he was taken prisoner.
Later in the action this soldier gave his life in a brave and determined effort to escape his captors and rejoin his fighting comrades." [3].
Sources
[1] CWGC
[2] London Gazettte 37162, page 3494.
[3] National Archives file WO373/46/298.
St Nazaire Society website
Primary Roll of Honour:
'2 Cdo. Roll of Honour'
Photo of Commando in Gallery:
Yes
Photo of grave in Gallery:
Yes
Archive pages :
No 2 Commando
No 4 Independent Company
St. Nazaire Commandos