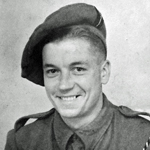 Lance Sergeant Frederick Peachey from Warrington served with the Independent Companies and No 2 Commando.
Recommendation for the Military Medal
Gulf of Salerno 17 Sep. '43.
"At Piegolette on the 17 Sep 43 this N.C.O. performed his duties fearlessly and with extreme keenness. On more than one occasion in darkness and in daylight he went out with another man to locate enemy M.Gs which were firing at his section position, as a result of which effective fire was brought to bear on the enemy. Throughout the operation from the initial landing he was always in the forefront of his sections activities and served as a very fine example to all the troop. He was wounded at a later stage in the Piegolette operation. This N.C.O. had previously taken part in the Commando raids of Vaagso and St Nazaire where he distinguished himself for his coolness and steadiness under fire. On the latter raid he was seriously wounded but continued his L.M.G. fire from the deck of his M.L." [Recommended by Capt T. Gordon-Hemming.]
Recommendation for a Bar to the Military Medal
"On 17 Apr 45, L/Sgt. Peachey was acting Section Sgt in a Troop ordered to attack the bridges across the R. Reno and neighbouring canals West of Argenta. Owing to an earlier casualty he had no Section Officer.
Peachey led the assualt section into the attack on the bridge himself, and was then ordered to proceed forward to attack positions beyond the bridge. At this stage the enemy reinforced his position and counter-attacked strongly.  His Troop Cdr was wounded and more than half his Section had become casualties when the German counter-attack carried the enemy into our forward positions in this section.
Peachey with superb coolness and disregard for himself rallied the remnants of his section and led an attack with bayonets and grenade on the advancing enemy with such ferocity and determination that the enemy were driven back, he personally killing or wounding at least 3 Germans. During this assault Peachey was badly wounded in the chest, but he continued from a prone position to encourage his men and engage the enemy.
Peachey's bravery and high standard of leadership materially contributed to the smashing of the enemy counter-attack and the securing of our defensive position."
[Recommended by Lt. Col. F.W. Fynn, MC,  Cmdg. No. 2 Commando.]
More can be read about him here: No 2 Cdo Some of the men
Sources
MM - London Gazette 36327, page 257 // National Archives file WO373/4/178.
Bar to MM -  London Gazette 37235, page 4267 // National Archives file WO373/13/371.
St. Nazaire Society website.
British Army Casualty Lists 1939 - 45 / National Archives files ref WO417/41, WO417/68, and WO417/91.
[Image] Mark Brammer, great nephew of Frederick Peachey.
Photo of Commando in Gallery:
Yes
Archive pages :
No 2 Commando
No 4 Independent Company
St. Nazaire Commandos