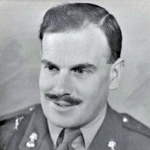 Commanding Officer No 5 Commando when they sailed to India in November 1943 until the 12th September 1944 when he relinquished his command to Lt Col Pollitt and rejoined his Regiment, the Royal Inniskilling Fusiliers.
Recommendation
Plouvain, France 1940. Throughout the period May 12th- 31st Captain Shaw displayed exceptional courage, determination, and power of leadership while commanding a company and set a very fine example to those under him. On May 23rd his Company was holding a wide sector near Plouvain. During the night he was heavily attacked and a part of his position was lost. He at once led his very small available reserve, and unhesitatingly counter attacked a much superior force. Several of his men were hit at once, but Captain Shaw and the handful of men now with him closed with the enemy, and inflicted sufficient losses with grenade and rifle fire to check the enemy's advance and restore the position. Though cut off for a considerable time, Captain Shaw, through skilful use of grenades, succeeded in breaking through the enemy, who had surrounded him, and rejoined his Company. His very gallant action enabled his Company to carry out its task to the end. (National Archives file WO373/16.)
Recommendation
At Argenta on 17 April 45 when in command of his battalion with a squadron of tanks under command, Lt-Col Shaw's conduct of the battle was remarkable. Although initially directed in a NW direction, he appreciated that by a flanking movement to the SW he would be in position to seal off any enemy still in the Argenta gap and to cover the main thrust of the Division in a NW direction. At the time, Lt-Col Shaw carried out this movement, a strong German counter attack with tanks was being mounted against a very vulnerable part of the Division. With complete disregard of personal safety, Lt-Col Shaw personally established his Bttn on the bank NW of Argenta, and repulsed what was known to be a divisional effort by the Germans to restore their Argenta position. The magnificent fighting spirit which his battalion displayed on this occasion and again when he led them to the Condotto Motte was very largely due to the inspiring leadership and courage displayed by Lt-Col Shaw [National Archives file WO373/14/5.]
Post war
Photo of Commando in Gallery:
Yes
Archive pages :
No 5 Commando
‹ WOOD, Steven Patrick up POLLITT, Charles Jordan Bellingham ›