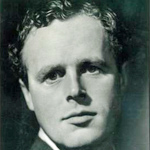 Lieutenant David Haig-Thomas,  No. 4 Commando 'C' troop, died during operations at Normandy on D Day. [1].
A prominent ornithologist and explorer, David Haig-Thomas competed in rowing at the 1932 Olympics, travelled to Abyssinia in 1933 and in 1934 took part in the Oxford University Ellesmere Land Expedition under Edward Shackleton. In 1936 he led an expedition to Iceland and in 1937-1938 led a second expedition to Ellesmere Island via Greenland. In 1939, Haig-Thomas donated a collection of Thule archaeology from Northern Greenland to the British Museum, excavated during the 1937 expedition
[Source: British Museum].

He also has an island in the Arctic named after him. "We feel sure all members, and particularly those who served with David in No, 4 Commando, will be interested to know that a previously undiscovered island in the Arctic (which he discovered in 1937) has been named after him, and is now called Haig Thomas Island. Its position is 78' 15' N. 94" 30'W." [Source: Commando Association newsletter 79].

Extract from his entry in the CVA Gallery.
Written by John Martin, nephew of Sgt Donald Martin, to Alex Haig-Thomas (grandson).
"My late uncle, Donald Martin, knew him well. For the best part of two years he was your grandfather's section sergeant in "C" Troop 4 Cdo. He was very fond of your grandfather as - I suspect - were most of that section. Through my uncle, I also came across Sammy Ryder, who was your grandfather's batman and who was with him when he was killed. Sammy was lucky to survive and to get back to 4 Cdo.
As you probably know, most of our fallen are buried in CWGC cemeteries but your grandfather, for some reason, was buried in Bavent churchyard where his grave always appeared so well tended. His body was recovered by two young French boys who carried it to a farmhouse just outside the village. I met one of them in Bavent on a vist with my uncle and Sammy Ryder. His name was Robert Godey, and for some years I wrote to him. He found your grandfather's service watch and kept it. During a very emotional moment, he gave it to Sammy. I felt that Sammy deserved that. He was a small pugnacious scouser, who had clearly worshipped your grandfather. Each time I met him in Bavent, he had travelled by train and ferry from Liverpool carrying a poppy wreath and a small suitcase just to visit your grandfather's grave.
I am sure that your grandfather was viewed as something of an oddity by his section, given his success as a pre-war explorer and naturalist and also possibly his age, though he had skills as such that were so valuable to 4 Cdo. ("C" Troop was a climbing and parachuting troop.) I sense there was generally enormous affection for him. You possibly know that he was assigned very shortly before D-Day to Sixth Airborne Divn. as a liason officer and that is why he and Sammy parachuted in early on the morning of D-Day. I understand that his stick came down on marshy ground close to the River Dives and well away from where they should have landed. They were ambushed near a cross roads and he was killed. Philippe Godey and his friend had seen them descending and had gone out to warn them that there were Germans in the area."
Additional Sources
[1] CWGC
[2] No 14 Cdo. War Diary National Archives file WO218/42.
[3] No 14 Cdo. War Diary National Archives file WO218/58
[Image] His grandson Alex Haig-Thomas.
Primary Roll of Honour:
'4 Cdo. Roll of Honour'
Linked content:
4 Commando 'C' Troop names
Photo of Commando in Gallery:
Yes
Archive pages :
No 4 Commando
No 14 Commando