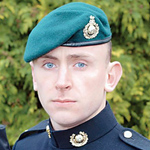 Marine Craig Hodgkinson, 4 Assault Sqn. RM, died of a heart attack whilst playing in a rugby match between the Royal Navy and Cornwall County.

A keen rugby player, Craig played throughout his school career, including games for the Scotland Under 18s XV.  He also played for Glasgow Hawks and was a member of the team that toured South Africa in 2003 and were unbeaten in their three matches.

He joined the Marines in May 2004 and was awarded the King's badge after completing training at the Commando Training Centres.  Mne. Hodgkinson joined 4 Assault Squadron Royal Marines onboard HMS Bulwark in 2005.

Cdr Andy Aspden, Executive Officer of HMS Bulwark, said: "Craig was a larger than life character who had the potential to go far within the Royal Marines." "He was intelligent, mature, highly professional and an extremely fit individual who was passionate about life and sports. He will be sorely missed."