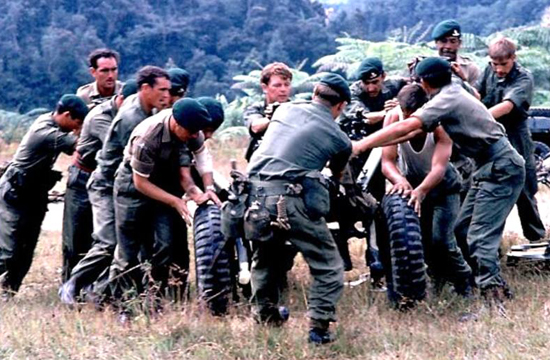 The first Army Commandos were raised by a Gunner, Lt Col John Durnford-Slater RA in June 1940, following the defeat ending with the evacuation at Dunkirk, The Commandos struck at the German forces at a time when Britain was otherwise powerless. Raids were made on the coasts of Norway, France and the Mediterranean. By the time of the Normandy landings of 6 June 1944, the Commando forces were of a considerable size and had played a vital part on operations in all theatres of war.

After the Second World War the Commando role passed entirely to the Royal Marines, the Royal Navy’s amphibious infantry. Army Commando units ceased to exist. In the late 1950s, Britain’s defence policy began to stress the importance of a worldwide maritime strategy. The Royal Navy commissioned Commando Carriers such as HMS Bulwark and HMS Albion. The Royal Marines, who no longer had their own artillery decide that they required support from an Army artillery Regiment.

During 1962, 29 Field Regiment RA were deployed with 25 Pounder guns in Aden and Kuwait, deterring Iraq from invading the oil fields. On the back of these deployments, the Regiment was chosen to re-role as Commando Artillery. The men of the newly formed 29 Commando Regiment RA trained for and passed the All Arms Commando Course at Commando Training Centre Royal Marines Lympstone. It was a proud and historic moment when the first Army Commandos since the end of the War received their Green Berets on 15 May 1962. The 25 Pounders in service with the Regiment at that time were then replaced by the 105mm Pack Howitzer. In 1965, 95 Commando (Light) Regiment, Royal Artillery, was formed. In 1971 95 Commando joined with 29 Commando.

The composition of the Regiment since it’s formation in 1962 has changed constantly to accommodate the demands made on the UK Armed Forces.

To become a Commando Gunner you must pass the arduous All Arms Commando Course held at Royal Marines Training Centre, Lympstone, which in turn earns you the right to proudly wear the coveted Green Beret.

Gallery Images of 95 Commando and 29 Commando