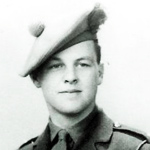 Lieutenant Bill 'Tiger' Watson, 1 troop, was awarded the Military Cross in recognition of gallant and distinguished services during the raid on St. Nazaire [1]. ​
He had been commissioned Second Lieutenant on 21 May 1941 [2].
His role on the raid had been to command a protection party for the demolition party [3] led by Captain Pritchard [more...], on motor launch ML 457.  He was wounded and taken prisoner during the raid. Once his wounds had healed he was put to work in the medical wing of the prisoner of war camp Oflag 9A/H at Spangenberg bei Kassel in Germany [3a].  Before the war he had been a medical student and after his release he resumed his studies and had a successful career as a Doctor [4].
On the 6th May 1949 Lt. W.H. Watson was awarded the Efficiency Medal (Territorial) [5].
Recommendation for M.C.
On 28 March 1942 during the commando raid at St Nazaire, France.
"Lieut. Watson was in charge of a protection party which landed ashore first at the Old Mole, and whose duty was to protect the personnel carrying out the demolitions on the inner lock gates. Immediately after landing he was wounded in the leg, but continued to lead his men against enemy machine gun posts which were in the path of his advance.
When it was found impossible for the demolition party to attain their objective, and wwhen the officer in charge of the demolition party had been killed, Lieut. Watson organised the surviving personnel of both parties into an assault group and kept the area of re-embarkation at the Old Mole clear of constant enemy attack.
During this action he showed complete disregard for his own safety, constantly pushing forward at the head of his small party to silence enemy machine gun positions and so prevented devastating enemy fire from harrassing the withdrawal of the main body to the point of re-embarkation.
At one point during the operation he had his haversack blown from his side, and later when dashing forward alone to destroy an enemy post, he was badly wounded this time in the arm. Unperturbed by his wounds and refusing medical aid he continued at the head of his men displaying personal gallantry and relentless determination of the first order. All this was done on his own initiative.
His courage and leadership were exemplary and the effectiveness of the action he pursued was shown in the successful withdrawal of the main body into the area of the Old Mole which he and his party had kept from the enemy."[3].
Sources
[1] London Gazette Supp. 37162, page 3493.
[2] London Gazette Supp. 35195, page 3505
[3] National Archives file WO 373/46/263.
[3a] Prisoners of War 1715-1945 / National Archives file WO392/1.
[4] + [image] Lieut. Watson MC and James Dorrian author of Storming St Nazaire.
[5] London Gazette Supp. 38602, page 2231.
[6] London Gazette Supp. 56430, page 22.
Notes
Rank shown as in LG and NA entries @ [1], [3], and [5] above.
Photo of Commando in Gallery:
Yes
Archive pages :
No 2 Commando
St. Nazaire Commandos