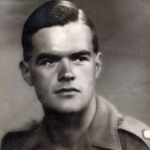 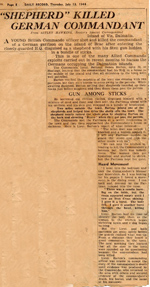 Bernard James Barton was commissioned Second Lieutenant in The Buffs on the 22nd June 1940 (1).

Citation for the MC whilst serving with 44 Reconnaissance Regiment.

On the coastal sector North of Enfidaville on the night of 9th May 1943, Lieutenant Barton was in command of a night reconnaissance patrol consisting of himself, an RE Corporal, and 7 Other Ranks . In the course of the patrol it became necessary to negotiate an enemy minefield which was known to be sewn with A/Tk and A/P mines. Halfway through the minefield an 'S' mine exploded, wounding the Corporal and 5 other ranks. After arranging for their evacuation to the rear, Lieutenant Barton continued the patrol accompanied by the one remaining Sapper, and having crossed the remainder of the minefield, located two enemy posts which were known to be occupied by day, but were found by him to be unoccupied at night. Lieutenant Barton was successful in retracing his steps through the minefield. He brought back valuable information and throughout the whole operation showed great determination and courage of a high order (3).

On the 7th January 1944 the No 2 Commando war diary records the fact that Lieut. Barton MC joined No 2 Commando, with others, recruited from the 5th Army and from North Africa.

On the 20th July 1944 it was announced that he had been awarded the DSO for gallant and distinguished services in Italy. (4)

The then Lieut (temp Captain) Barton had taken part in several recce operations on the Dalmatian islands, including Brac. On one of these he donned shepherds clothing to get past guards and kill the German Commandant of Brac. On these and others he brought back prisoners and information.  He was awarded the DSO for his gallantry.

Despite the fact that the award recommendation by his Commanding Officer Lt Col Jack Churchill  was marked "No publicity to be given to this citation"(4), the details of the raid were published at the time in newspapers [view] in the UK  and as a result it was decided he could no longer remain with No 2 Commando as his life would have been at risk in the event of capture. The No 2 Commando War Diary for the 20th July 1944 records the fact that he was informed of this decision whilst holding the rank of Temporary Captain in charge of 5 troop. He left the Commando.

On the 4th October 1945 the then Temp. Major Barton DSO, MC, was awarded a bar to his DSO for gallant and distinguished services in the field. (5)

Post war he moved to Africa and became a farmer (6).