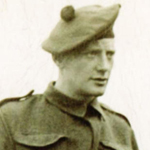 Regimental Sergeant Major Alan Moss, HQ 2 Commando, was shot and killed during Operation Chariot, the raid at St. Nazaire. Embarking on motor launch ML267 he later received a posthumous Mention in Despatches.
Recommendation
"During the Commando raid on St Nazaire on 28th March 1942 the motor launch in which RSM Moss was travelling was set on fire by enemy shore guns. The troops on board, many of whom were badly wounded, were forced to abandon ship.
Whilst RSM Moss was sitting on and propelling a Carley float, upon which there were already several wounded men, he sighted another wounded soldier in the water who was in danger of drowning *.
RSM Moss left the float, dragged the wounded soldier from the water and gave him his own place on the float. Thereupon he proceeded to tow the float along by swimming in front of it, in a determined effort to bring his wounded comrades to safety.
It was whilst performing this gallant and self sacrificing action that RSM Moss gave his own life, that the lives of others may be saved."
Alan Moss first served in the Liverpool Scots Q.O.C.H. TA, then as a Sergeant in No.4 Independent Company, before becoming the first R.S.M. of No.2 Commando when it was formed. Eight of the eleven Commandos on ML267 died, including RSM Moss and the young Private Diamond he had rescued from the water.
Sources
CWGC.
London Gazette 37162, page 3494.
National Archives file WO373/46/297.
Storming St Nazaire, author James Dorrian.
* This was Pte. Thomas Diamond. See Linked Content below.
Notes

The following words were written by L/Sgt Joe Rogers MM who was in No.4 Ind Coy and No.2 Cdo. and took part in Operation Chariot, RSM Alan Moss 2 Commando "The Best" and 4 Ind. Coy in Norway; became the first RSM of 2 Cdo; was killed at St Nazaire and would most certainly have been highly decorated if he had lived. MiD St Nazaire.