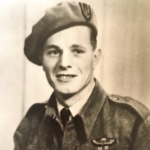 Private Robert Seekings, No. 7 Commando, was wounded 28 May 1941 during operations in Crete whilst his unit were designated as 'D' Battalion of Layforce [1].
Service History [2]
13 February 1938 enlisted at Ely into the T.A.*
3 September 1939 mobilised with the Cambridgeshire Regiment.
1940 volunteered for the Commandos.
1941 No.7 Commando designated as 'D' Bn., Layforce.
Served with Layforce in North Africa and Crete.
Wounded during operations in Crete.
Escaped from Crete by boat from Sfakia, adrift for 10 days before rescue by Royal Navy.
Completed Parachute Training and joined the S.A.S. when it expanded its operations in Sicily and Italy.
18 September 1945 demobbed, medical classification B2.
Military conduct – Exemplary (from pay book).
Sources
[1] British Army Casualty Lists 1939-45 / National Archives file WO417/28.
[2] [Image] His son Reg Seekings.
Notes
* Declared date of birth as 13 February 1921 on joining T.A. Actual age therefore 15.
His brother also served - see Linked Content below.
Linked content:
SEEKINGS, Albert Reginald
Photo of Commando in Gallery:
Yes
Archive pages :
No 7 Commando
Special Air Service