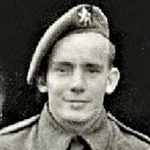 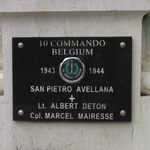 Lance Corporal Marcel Mairesse, who served in 4 (Belgian) troop of the Commando,  was killed during operations in Italy.

Extract from the book "Commandos in Exile " written by Nick van der Bijl.

On 22 December at 8.00pm, Lieutenant Albert Deton [view] and a seventeen-man fighting patrol crossed the Sangro to capture a sniper who had been firing at the Belgians the previous day. Deton, aged twenty-six, had fought in the Belgium campaign in 1940. With no sign of German activity, the patrol pressed on along a track for about 400 yards and was about to return when somone was heard coming along the track, and then the order 'Halt!'. There was a brief burst of firing in the darkness and when Deton ordered a right-flanking attack covered by his Bren gunners, two Germans were seen scurrying through the undergrowth; a third soldier was found badly wounded. But Lance Corporal Marcel Mairesse, who was Deton's batman, was bleeding badly from a wound in the thigh. Carried on a makeshift stretcher along paths slippery with ice, and across the Sangro to the shelter of an abandoned farm, every step was agony for him, however he remained silent. Since the Troop still lacked radios, Sergeant Dedeken made his way to San Pietro (Avellana), but by the time he returned at 4.00pm with Lieutenant van Peperstraete, the Troop Medical Officer, and Father Corbisier, the Chaplain, Mairesse was dead from loss of blood and shock. He was the first Belgian killed in action. Aged twenty-seven, he had fought in Libya with the Free French.

There is a Plaque in his honour at San Pietro Avellana Piazza, Umberto, Italy. See photo in Gallery.