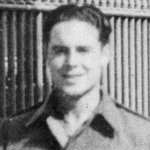 Marine Leslie Bradshaw, 10 Platoon, 'X' Coy, was awarded the Military Medal in recognition of gallant and distinguished services in the combined attack on Dieppe. He later served in 30 Commando.
Recommendation
Operation Jubilee (Dieppe Area) 19th August 1942.
Whilst approaching the beach his boat engaged by heavy Machine Gun and rifle fire, the CO ordered the buildings on the beach from where the fire was coming to be engaged by LMG. A gun opened up by Marine Bradshaw, who also ordered the HQ LMG into action. Both guns were kept continuously in action until such time as the targets were obscured by smoke. During this time the MLC was repeatedly hit by MG fire and very accurate rifle fire from the beach. Owing to the position of this MLC the men had to stand up to engage the targets. Bradshaw carried out his duties very courageously whilst under heavy fire and without thought to his own personal safety.
Recommended for Military Medal by Capt Manners, RM.
Approved by Brigadier R. Laycock.
His death was announced in Commando Association newsletter 108 issued March 1999.
Sources
London Gazette 35729, page 4328.
National Archives file WO373/93/846.
Ian Fleming's Commandos: The Story of the Legendary 30 Assault Unit, author Nicholas Rankin.
Commando Association newsletter 108.
[Image]  His son Bill Bradshaw.
Archive pages :
40RM Commando
30 Commando Assault Unit