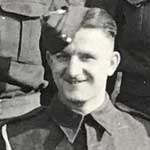 Marine Jonathan Reeves, 'Y' Troop, died during operations near Dunkirk, France. Prior to his service in 48RM Commando he had served in 17 Platoon 7th RM Battalion.
Extract from source at [1] below
Another similar patrol was carried out by Y Troop on September 25th, this time after dark. At 2000 hours, Major de Stacpoole left Ferme Legrand to PIAT an enemy-held farm. He took a PIAT party and a support party of two bren guns under command of Lieutenant Fouche.
On getting into position, the bren party observed three Germans working in a field some 40 yards to their front. They withheld fire until, at 2145 hours, a German 40-mm opened up along the road from Pont de Pte. Synthe. The brens then fired at the Germans, they dropped, and were not seen again. Almost certainly they were hit.
At the same time, our MMGs opened up on Pont de Pte. Synthe at a range of 4,000 yards to draw fire from the patrol and make a noise to deaden that of the patrol. This was successful as the Germans returned the fire but quite ineffectively.
The PIAT then fired on the enemy farm but after one round was fired, jammed. Almost immediately a Spandau opened up at a range of about 100 yards and with its first burst hit two of the PIAT party. These now withdrew under cover of the bren group and were later joined by the bren group, which had suffered two casualties.
The enemy now began to shell and mortar the area, which appeared to be a DF (Defensive Fire) task, and the patrol withdrew to a field nearby. Here an 88 mm began firing uncomfortably near them, probably from the area of the chateau near the canal 1,000 yards to the north-east.
The patrol finally reached Ferme Legrand at 0210 hours, great difficulty being met in carrying the casualties, which were one killed and three wounded. (Marine Reeves was killed and one of the wounded was Sergeant Harris.) The next night the- enemy was successfully PIATed [1]
Sources
CWGC.
Registers of Reports of Deaths - Naval Ratings / National Archives file ADM 104/136.
Births registered in Lambeth, Apr/May/June 1921.
CVA Gallery photo from David Barnes.
[1] The official book '48RM Commando-The Story 1944-1946' ( written by an officer of 48RM Commando).
Primary Roll of Honour:
48RM Cdo. Roll of Honour
Photo of Commando in Gallery:
Yes
Photo of grave in Gallery:
Yes
Archive pages :
48RM Commando