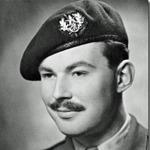 Captain Douglas Cotton Minchin was missing reported presumed killed after his patrol prior to the planned attack at Lake Comacchio, Italy, came under fire.
He had earlier served with 12 Commando on the Lofoten raid, and had also been Chief Instructor at the Commando Basic Training Centre.
Douglas Cotton Minchin was in the Cameronians (Scottish Rifles). He served briefly in the RAF before returning at his own request to the Army. He was later attached as a Lieutenant to No.12 Commando for a period of time before becoming Chief Instructor at the CBTC, Achnacarry.  In 1944 he was posted overseas to the CMF after a brief spell at the HOC. From the 7th October 1944 he was an Instructor at the 2 Commando Brigade Training Centre at Bari.  On the 2nd February1945 he was attached as a personal advisor to 43 RM Commando and was subsequently killed in action on the 15th March 1945.
He therefore has the unique status of having been attached at some stage prior to his death to the Army, RAF, and the Royal Navy.
Postings
13/5/40 Proceeded to No 6 Elementary Flying Training School, Sywell Northampton Home.
13/6/40 Relinquishes temp. commission as Pilot Officer to return to Army duty *
15/6/40 Joined 301 ITC for duty Oswestry.
18/10/40 Posted from 301st ITC to No 10 Commando.
26/11/40 Posted to No 4 Special Service Bn.  To join immediately.
28/11/40 Posted from No 10 to No 8 Commando Criccieth Wales.
4/3/41 Posted to No 12 Commando Warsash Hants.
14/9/42 Posted to Commando Depot.
10/12/43 Appt Chief Instructor Commando Basic Trg Centre  with paid A/Maj.
2/9/44 posted HOC retains rank of A/Major.
6/10/44 emplaned for overseas, Bari, CMF
7/10/44 Posted to No.2 Cdo.Bde. Trg. Centre rank of Maj. CMF.
2/2/45  PA to 43RM Commando, Italy.
14/3/45 Missing.
15/3/45 Presumed killed in Action.
Sources
Service Record
​ * London Gazettes Supp. 34927, page 5092
​CVA gallery images from his sister Daphne Garey.
CVA Gallery images of the CBTC.
The book Commando Subaltern at War by Lieut. W.G. Jenkins DSO.
Primary Roll of Honour:
43RM Cdo. Roll of Honour
Photo of Commando in Gallery:
Yes
Archive pages :
43RM Commando
No 12 Commando
Commando Training