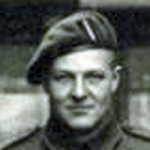 Victor Cobley served in the Heavy Weapons Troop of No 2 Commando. See this image : HWT Gibraltar 1943.

Awarded the BEM whilst a Police Constable with the Plymouth City Police.
"When a building at Plymouth was partly demolished by high explosive bombs, Constable Cobley worked hard and intelligently to rescue the casualties. He then helped to release several persons trapped in the basement of a private house. Completing this task, and whilst bombing was still active, he attended to the wants of victims bombed out of their homes.

Further bombs dropped during this period and the Constable, with assistance, extricated three persons from a house that had received a direct hit and was on fire. This rescue was particularly hazardous and necessitated working with the greatest possible speed. Cobley continued his work, exhibiting a conspicuously high standard of conduct generally during the period of the raid." [Source:  LG Publication date: 22 July 1941; Supplement 35226; Page 4254 ]