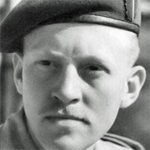 Lance Corporal Jack Barlow served in 6 troop and also in the Intel Section of No.2 Commando. He was one of the Metropolitan Police Intakes to the Commandos. In 1939 he was a Police Constable residing at the Police Section House, Arlington Road, Camden London [Source: The 1939 Register for Camden].
The following is from his daughter Jennie Barlow.
1919 15th July - born in Royton, near Oldham.
1924 St Anne's Church School, Royton; 1930 Chadderton Grammar School; 1937 Oldham Technical College.
1939 Joined Metropolitan Police.
1942 Volunteered for Commandos. Trained at Achnacarry. Posted to No 2 Commando.
1942 Based in Gibraltar for operations behind German and Italian lines in North Africa.
1943 Selected for officer training and posted to UK. Attended Sandhurst and commissioned in Royal Armoured Corps.
1944 Promoted to Lieutenant and posted to Indian Army for service with an Indian Cavalry Regiment (Mechanised) in Burma.
1945 Volunteered to go to Japan with Commonwealth Occupation Force as Deputy Assistant Provost Marshal, Special Investigation Branch, Corps of Military Police.
1947 Returned to United Kingdom and re-joined Metropolitan Police. Served in CID in 'D' Division, then Scotland Yard.
1948 Awarded BEM (Civil Division) for Gallantry.
1949 Applied to join Colonial Police and went to Malaya as Assistant Superintendent Special Branch. Employed on counter-terrorist duties. Promoted to Deputy Superintendent.
1953 Awarded Colonial Police Medal for Meritorious Service.
1956 Transferred to Cyprus as Superintendent I/C Troodos Division and led campaign against EOKA mountain guerillas led by General Grivas.
1958 Promoted to Chief Superintendent at Police Special Branch HQ and acted as Deputy to Director of Intelligence (Sir John Prendergast).
1959 Awarded MBE.
1960 On Cyprus achieving independence, returned to the UK and joined the Foreign & Commonwealth Office.
1964 Joined British Advisory Mission to Vietnam.
1967 Returned to the UK and joined the Ministry of Defence on Security/ Intelligence duties.
1986 Retired and devoted time to landscape painting, gardening, DIY, motor touring and caring for invalid wife.
2002 Died 9th November.

Citation for British Empire Medal (Civil Division)
Police Sergeant Butler and Police Constable Barlow went to a third floor flat with a warrant to search the premises for stolen property. As the officers entered the living room a man came out of the bedroom. While being questioned he suddenly stepped backwards and entering the sitting room made towards the landing door. The officers followed and when the man was halfway across the room he swung round and pointed an automatic pistol at them which he threatened to fire if they advanced further. The officers immediately closed with the man who repeated his threat and a violent struggle ensued. Suddenly the pistol discharged and the man collapsed with a wound in the head, the bullet having entered his fore-head after grazing Sergeant Butler's wrist. The man was then taken to hospital. The two Police officers knew that he was a dangerous criminal and there is little doubt that he intended to use the firearm to make good his escape. Both Sergeant Butler and Constable Barlow showed great courage and determination, in their endeavour to disarm and apprehend him [Source London Gazette 38479, page 6487].