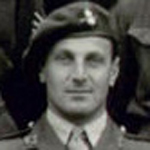 Lieutenant (Temporary Captain) Arthur Komrower was appointed D.S.O. [1] in recognition of gallant and distinguished service whilst temporarily commanding No. 3 Commando during operations at Termoli, Italy, between 4 -6 October 1943 [2]. This was during Lt. Col. Peter Young's short period of illness with malaria [3].
Prior to this he had been with No.3 Commando during operations at Vaagso [3] and was a Troop Commander of 4 troop in August 1942 [view....].
At some stage in early 1944 he became Deputy Commandant at the Commando Basic Training Centre [4].
At the end of the war when Lt. Colonel Charles Vaughan was released from service, Arthur Komrower became Commandant of the Training Centre [5] + [6].
Extract from Commando Association newsletter 82
We deeply mourn the passing on the 2nd December, 1985, of Arthur Komrower, a kind and charming man, whose interest in the Association was considerable. A long serving member of No. 3 Commando, which he later commanded, Commandant of the Special Training Centre at Achnacarry after the late Colonel Charles Vaughan, and our Association President during the years 198l to 1983, during which time he spared no effort to help ensure the continued success of our Association. It can certainly be said that in spite of poor health in recent times, he continued to give us his full support, and the benefit of his very considerable business experience [6].
Sources
[1] London Gazette 36349, page 518.
[2] National Archives file WO373/4/220.
[3] Storm From The Sea, author Brig. Peter Young.
[4] CVA Gallery images of CBTC Staff/Courses.
[5] CVA Gallery images of CBTC Staff/Courses.
[6] Commando Association newsletter 82 issued March 1986.
[7] London Gazette 38405, page 5044.
[8] London Gazette S38889, page 1936.
Photo of Commando in Gallery:
Yes
Archive pages :
No 3 Commando
Commando Training