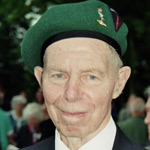 Officer Commanding the Special Service Brigade Signal troop.
Service History
5 Commando - July 1940 to November 1940
3 Commando (raising Special Service Brigade Signal Section) - Nov 1940 to Dec 1940
Special Service Brigade Signals - Dec 1940 to October 1943.
Jan 1944 to Dec 1944, Major Leahy was D.C.S.O. SS Group (Deputy Chief Signals Officer, Special Service Group) and, according to War Diaries, visited 1 SS Brigade Signals Troop at Le Plein, 16th July 1944.
Obituary by Henry Brown OBE Secretary of the Commando Association
Published in their newsletter 119 issued September 2004.
"With very deep regret the passing of Col. John Leahy OBE is recorded. John, during 1996-98 so excellently served the Association as President. His long service with the wartime Commandos commenced in 1940 with No.5 Commando, but he was to become better known to many as the Commanding Officer of the Special Service Brigade Signal Troop, where there is no doubt he served with great distinction.
After the disbandment of the Army Commandos he served on in the Army in the higher echelon reaching the rank of full Colonel, later being awarded the OBE. Throughout his post-war life, John Leahy continued to have a very keen interest in Association affairs and activities and regularly attended meetings of the General Committee. There is no doubt that with his passing, the Association has lost a very great Commando and staunch supporter of the Association cause. HB."
Sources
OBE - London Gazettes Supp.36866, page 15.
Photo of Commando in Gallery:
Yes
Archive pages :
Brigade Signals