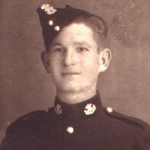 Private James Mather was reported missing 2 June 1941 during operations in Crete and later found to be a prisoner of war [1]. He had been imprisoned at Stalag 4C, a prisoner of war camp at Wistritz bei Teplitz, Sudetenland ( part of former Czechoslovakia) [2a]. He died shortly after his release in 1945 due to ill treatment whilst a prisoner [3].