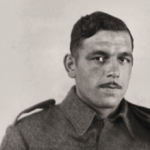 Sergeant Thomas Frank Durrant died during Operation Chariot, the raid at St. Nazaire.  He was posthumously awarded the Victoria Cross.

For great gallantry, skill and devotion to duty when in charge of a Lewis gun in H.M. Motor Launch ML 306 in the St. Nazaire raid on the 28th March, 1942.

Motor Launch 306 came under heavy fire while proceeding up the River Loire towards the port. Sergeant Durrant, in his position abaft the bridge, where he had no cover or protection, engaged enemy gun positions and searchlights on shore. During this engagement he was severely wounded in the arm but refused to leave his gun.

The Motor Launch subsequently went down the river and was attacked by a German destroyer at 50-60 yards range, and often closer. In this action Sergeant Durrant continued to fire at the destroyer's bridge with the greatest coolness and with complete disregard of the enemy's fire. The Motor Launch was illuminated by the enemy searchlight and Sergeant Durrant drew on himself the individual attention of the enemy guns, and was again wounded, in many places.

Despite these further wounds he stayed in his exposed position, still firing his gun, although after a time only able to support himself by holding on to the gun mounting. After a running fight, the Commander of the German destroyer called on the Motor Launch to surrender. Sergeant Durrant's answer was a further burst of fire at the destroyer's bridge. Although now very weak he went on firing, using drums of ammunition as fast as they could be replaced.

A renewed attack by the enemy vessel eventually silenced the fire of the Motor Launch but Sergeant Durrant refused to give up until the destroyer came alongside, grappled the Motor Launch and took prisoner those who remained alive.

Sergeant Durrant's gallant fight was commended by the German officers on boarding the Motor Launch.