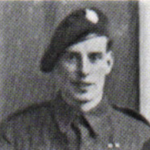 Sergeant John Gilmour enlisted into the 79th (Scottish Horse) Regiment RA in May 1940. Volunteering for special service, he joined the 5th Special Service Battalion in November 1940. In early 1941 he was posted to No 6 Commando (101 Troop), which was absorbed into the newly formed No 2 Special Boat Section (SBS) in April 1942.  He was awarded the Military Medal twice for his gallantry [1][2][3].
Extract from 2 SBS memorandum February 1944
"Sgt Gilmour has done considerable work mostly with the Navy mostly in the Meditteranean. A parachutist now with 'Z' SBS." [see linked content below].
Citations
Military Medal
Sergeant Gilmour took part in the following special operations during the course of four submarine patrols:
Reconnaissance and beach marking during operation Torch, reconnaissance during operation Avalanche, landing operations in enemy territory (operation Marigold), and landing agents in enemy territories.
His bravery and devotion to duty in these operations set a fine example to the Other Ranks of the Special Boat Section [1a].
Bar to the Military Medal
On the night of 23rd March 1944 Captain Lunn and Sergeant Gilmour of the Special Boat Section landed in a canoe from a submarine on the Greek Island of Cephalonia to carry out a special operation.
Their mission having been successfully completed the weather was too rough to enable them to return to the submarine and the canoe foundered. It was decided to make for the hills and attempt to get into touch with a partisan organization with a view to subsequent escape. Having disposed of a German sentry that was unfortunately encountered, thereby raising the alarm, Sergeant Gilmour succeeded in establishing his identity to friendly Greeks and obtained shelter.
In spite of enemy vigilance, cold, lack of food and the necessity of making his way on foot over about 250 miles of mountainous enemy occupied territory, Sergeant Gilmour, with Captain Lunn, managed to get to the Greek mainland undetected and thence to the Preveza area, where the two men contacted the British Military Mission, who arranged for their transport to Italy.
Sergeant Gilmour showed high qualities of courage, endurance and resource [2a].
Sources
[1] London Gazette 36382, page 827 (February 1944).
[1a] National Archives file WO373/94/184.
[2] London Gazette 36699, page 4250 (September 1944).
[2a] National Archives file WO373/96/52.
[3] Obituary published 4 April 2010 on the Herald Scotland website [view on Forum...]..
Linked content:
A timeline of the Special Boat Section (Home)
Photo of Commando in Gallery:
Yes
Archive pages :
Special Boat Section/Squadron/Service
No 6 Commando