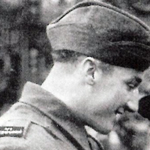 Sergeant James Allender, 101 Troop, was awarded a bar to his Military Medal for gallant and distinguished service on 26 February 1943 during the Battle for Steamroller Farm at El Arousa, Tunisia [1].
Recommendation
"February 26th 1943 Fedi et Attia (516128 Sheet 34)
During the action between VI Commando and a Battalion of Herman Goering Jaeger Regt., Sgt Allender showed exemplary courage and devotion to duty throughout while the section was moving up a hill under heavy M.G. and mortar fire and without cover. Sgt Allender fired his Bren gun resting it on another mans shoulders to get the necessary elevation.
During this period he was well exposed and enemy L.M.G. fire was directed at him. He was wounded but carried on. The troop later advanced over the same ground and it was found that a complete German M.G. team had been killed by Sgt Allender's fire and the gun was captured" [1a].
He had been awarded his first Military Medal for his courage at the Pont a Chin area on 21 May 1940 whilst a Private serving with his Regiment as part of the British Expeditionary Force in France [2].
Recommendation
During a bombardment of the Bde. area all telephone communication was broken he and Private William Stead, volunteered, went out and mended all lines maintaining them until the end of the action [2a].
The death of "Sgt. Allender MM and bar, of Sheffield, South Yorkshire" was announced in Commando Association newsletter 81 issued September 1985.
Sources