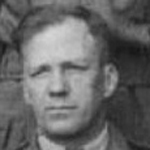 Regimental Sergeant Major Harold Beesley died whilst a prisoner of war in Poland having been captured during operations at Dieppe.

"As the Russians neared Stalag V111B the main body of the Dieppe prisoners were sent on a death march through blizzards and frost until they reached Stargard, Stalag 11D, Harry Beesley did not survive. At the time of writing, some Canadians said he was shot by the Russians for demanding food, but a few years ago, my Aunt, Harry's widow received a letter from a Mr Ivor Dunstan giving the following detail."

"From Stalag 11D, Harry was moved to camp BAB21 at Blechammer in upper Silesia. There on Christmas Day 1944 Harry and Ivor Dunstan managed to escape and made there way to Kracow, Poland. There the Russians made plans for them to go to Odessa and passage to England.

Early in February 1945 they were loaded onto an ancient train with hundreds of freed prisoners, crowded 30 to a carriage, although there was a pot bellied stove for heat there was no fuel for it. The journey was supposed to take 5 days, but it stretched to 10 and the train was not many miles from the start, desperate for heat, Harry led the prisoners to repeated raids to coal dumps. During one of these raids, two of the train coaches became uncoupled and started to roll back down a steep incline, Harry immediately ran after the coaches and attempted to apply the brake fitted to each side of the coaches. As the coaches slowed they “jumped” tracks trapping Harry underneath. The two coaches were packed with French Slave workers, many of whom would have been killed if Harry had not applied the brakes.

Harry Beesley died as he had lived, helping others”.

His nephew goes on to say "An excellent book was published in the UK by Coronet Books titled in the UK “The Dieppe Raid” and in Canada “Forgotten Heroes”  and written by John Mellor. This book relates the story of Harry Beesley's capture and imprisonment.

Since his capture at Dieppe with the Canadian forces, he had stayed with the Canadians throughout this time in POW camps. A few excerpts give a clue to his character “The water had been cut off in the Canadian compound, and only a little was allowed for drinking. One bitter morning the entire compound and German guards were amazed to see RSM Beesley march smartly across the parade ground, halt at a puddle of freezing water, strip to the waist, wash and shave, redress, wrap his towel around his neck and march back to the barracks. This was not to show his toughness but to raise morale and show contempt for his captors. The water was turned back on shortly afterwards”.  This is just one of many similar anecdotes."

Historical information for Krakow Rakowicki Cemetery.
Those buried here died while prisoners of war during the German occupation, most of the graves coming from the cemetery at the large camp at Lamsdorf, Stalag VIIIB (after 1943 known as Stalag 344), where there was a hospital of 450 beds used only for Commonwealth prisoners. (Source : CWGC.)