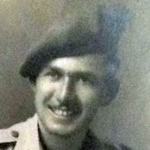 Lance Corporal George Hughes was awarded the Military Medal in recognition of gallant and distinguished service in Italy.
Recommendation
This NCO has served in the RAMC Section of this Commando in all the actions in which the Unit has fought in Italy since November 1943.  At all times he has displayed the greatest efficiency, devotion to duty and disregard for his own safety whilst dealing with casualties in the field.  The Medical Officer of this Unit, Captain E J D’Arcy MC, states that L/C Hughes’ individual actions on all occasions whilst treating and evacuating casualties have been responsible for saving a very considerable number of men’s’ lives.
On night 29/30 December 1943 the Unit carried out operation ‘Partridge’ which consisted of an assault landing behind enemy lines near the Garigliano (MR Italy 1/25,000 Sh. 171-1 SW Force Del Garigliano, (780932)).  L/C Hughes landed in the first flight and dealt with casualties under continuous enemy fire whilst the Unit was operating behind enemy front line positions.
In Operation Ornito on night 2/3 February 1944 (MR Italy, 1/50,000 Sheets No 160 II Sq 8503) the Unit advanced several miles into enemy territory, but was compelled to withdraw after suffering 50% casualties of all ranks.  Not only did L/C Hughes accompany the leading troops in the attack, dealing with casualties on the way, but after the withdrawal he led forward several S B parties to collect casualties left behind in enemy territory, and in the process captured a party of Boche with the assistance of one unarmed walking wounded case, who he organised as stretcher bearers and brought back to our lines.
During an attack carried out by the Commando whilst serving at Anzio on 19 March 1944, the Unit was surrounded and pinned down in a Wadi for 20 hours, and suffered very heavy casualties from continuous enemy artillery and mortar fire.  Throughout this period L/C Hughes displayed exemplary courage while evacuating casualties from exposed positions under direct fire from the enemy, and rendered indispensible assistance to the MO in organising an RAP only 100 yards from enemy positions.
During the period that L/C Hughes has served in this Unit, from March 1941, he has rendered most conscientious service as a Medical Orderly.  Casualties in the field were never in a too dangerous or exposed position for him to deal with.  His disregard for personal danger whilst carrying out his duties has at all times been outstanding, and his efficiency, zeal and devotion to duty have, at all times, been of the highest order.
[Recommended for the D.C.M. awarded the M.M.]
Sources
London Gazette 36710, page 4370.
National Archives file WO373/7/523.
Linked content:
Italy - Operation Partridge
'Anzio beachhead - Operation X'
Photo of Commando in Gallery:
Yes
Archive pages :
No 9 Commando