There may be additional content elsewhere such as in our Photo Gallery and Forum. 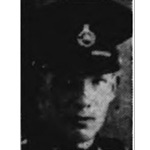 30 Commando Assault Unit
Marine Kenneth Cowan, from Belfast, died in an accident.
Extract from the Belfast Telegraph Monday 29 January 1945
"Commando Killed. Commando Kenneth Cowan, Royal Marine Commandos, third son of Mr. and Mrs. Cowan, 12 Jellicoe Avenue, Belfast, killed in an accident in England. He had five years' service, including two in the Merchant Navy. Two brothers are in the Royal Navy. His father has 27 years' service in the R.N. and is still serving."
Sources
CWGC.