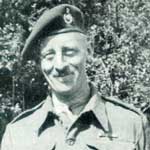 Lieutenant Colonel Campbell Richard Hardy, commanded the 9th RM Bn., until it was redesignated as 46 RM Commando on 1 August 1943. He remained as Commanding Officer 46RM Commando until the end November 1944 when he left to take up the post of  Brigade Commander 3rd Special Service Brigade which was operating in the Far East.
He was awarded the Distinguished Service Order, and a Bar to the Distinguished Service Order, during the Normandy campaign, and later a Second Bar to the Distinguished Service Order during operations in Burma [1] [2] [3] [4].
Obituary by Brigadier Peter Young D.S.O., M.C., M.A., F.S.A.
"Campbell Hardy, who died on the 29th July was, beyond question, the most renowned of the many Royal Marine officers who served with the Commandos in World War II.
He greatly distinguished himself whilst commanding 46 RM Commando in Normandy, and was awarded the D.S.O. and Bar.
Promoted Brigadier, he led 3 Commando Brigade in the last Arakan campaign, at the taking of Akyab and Myebon and in the ferocious fighting at Kangaw, winning a second Bar to his D.S.O.
After the war, Campbell Hardy rose to be Commandant General of the Royal Marines (1955 - 1959). It may be doubted whether in all its long history that ancient corps ever had a better officer at its head.
He was in every way an outstanding officer, at once formidable and kindly. He stood for discipline, but he was as fair as he was strict, besides being blessed with a lively sense of humour. He was above all a fighting commander, a skilled tactician and imperturbably cool under fire. He had the confidence of everyone who served with him.
Let us pay our tribute to the memory of a truly great soldier " [8].
Sources
[1] [Image] The Story of 46 Commando by Capt. P.K.W. Johnson RM.
[2] D.S.O. - London Gazette 36697, page 4218.
[3] Bar to D.S.O. - London Gazette 37013, page 1790.
[4] Second Bar to D.S.O. - London Gazette 37079, page 2527.
[5] London Gazette 38311, page 3370.
[6] London Gazette 39361, page 5431.
[7] Globe and Laurel Mar/Apr. 1952 edition.
[8] Commando Association newsletter 79 issued September 1984.
[9] London Gazette 40960, page 2.
Linked content:
3 Cdo Bde Third Jungle Book issue 9
Photo of Commando in Gallery:
Yes
Archive pages :
46RM Commando
3 Special Service / Commando Brigade
RM Commandos 1946 - present
Malaysia and Brunei
‹ 46RM Commando Commanders up GRAY, Thomas Malcolm ›